Let´s have a Kiki Function | Wien 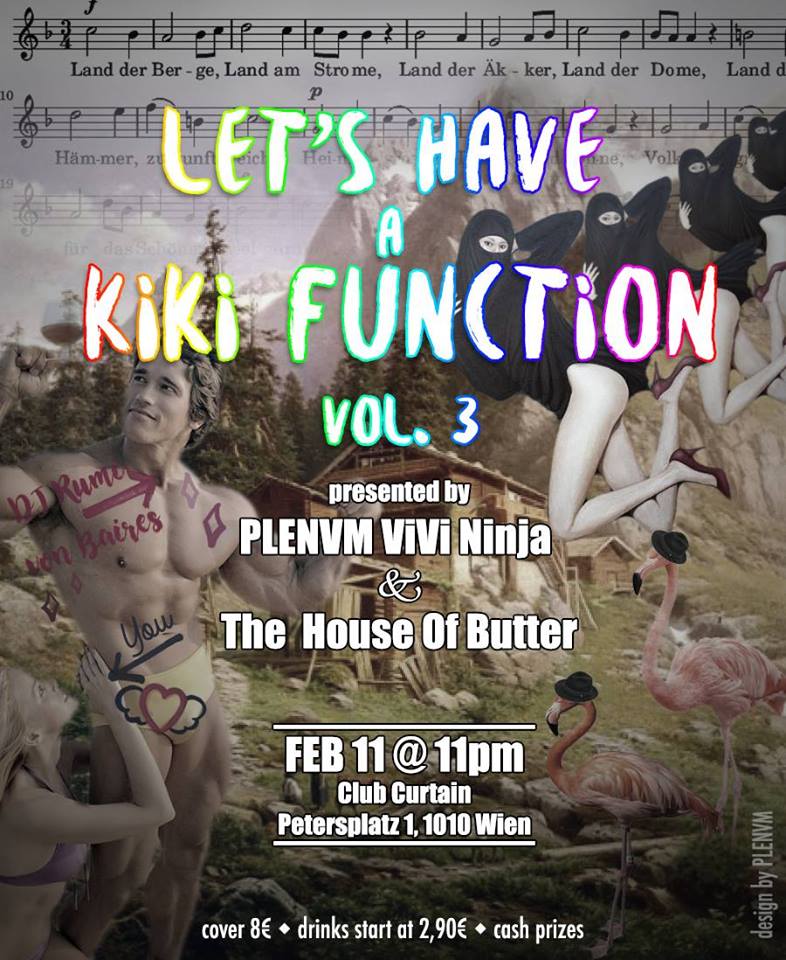 It’s a new year! Club Curtain opens its doors again for „Let’s Have a Kiki Function Vol. 3“ – a party and Voguing ball in the middle of Vienna’s 1st district.
Plenvm Ninja and the House of Butter are excited to bring this party back for the third time. Prepare for an all-Austrian themed party – but not the touristy style!!

As last time, we have DJ Rumi von Baires on the decks!

–REALNESS–
FUCK BOI REALNESS
We wanna see the millennial interpretation of BAM OIDA. Think buzzcuts, fitted caps, worried facial expression (the nature of the emotion being undeterminable), living with your parents at an adult age, etc.
Realness is not a looks-only category or a movement-category. You are expected to serve the character on the floor. Crowds and judges will decide who’s the most REAL!

–EUROPEAN RUNWAY–
HIDJAB TRACHTENVEREIN ERNTEDANK FAVORITEN FEMALE FIGURE
Austrian politicians have a hard time understanding the appeal of a good piece of fabric on your head and wanna ban it, even when it could be used to cover up excessively large ears or wrinkles from frowning. For Runway, a head scarf is a MUST this time. Your look needs to be either inspired by traditional Islamic headwear for females (hidjab) or traditional Austrian tracht (farmer women wearing headscarfs and Dirndl like they do on Sundays, when they wanna make the other women at the holy mass green with envy).

–VOGUE TO EVERYTHING–
SIGMUND FREUD GALORE
As last time, the rules are: you vogue, but the music doesn’t. Any type of music that isn’t typical Ballroom tracks will be spun by DJ Rumi von Baires. Your job is to respond to it in the language of Vogue.
Costumes should be inspired by anything that can be related to Sigmund Freud. However, this category does not rely on costuming heavily. Just have fun with it.

–VOGUE FEM–
WIEN IST ANDERS AD CAMPAIGN
For Vogue Fem, bring it with a look that could be used in the „Wien ist anders“ (Vienna is different) ad campaign that serves as the city slogan. Again, have fun with the motto and think anything from Haute Couture to tongue-in-cheek.