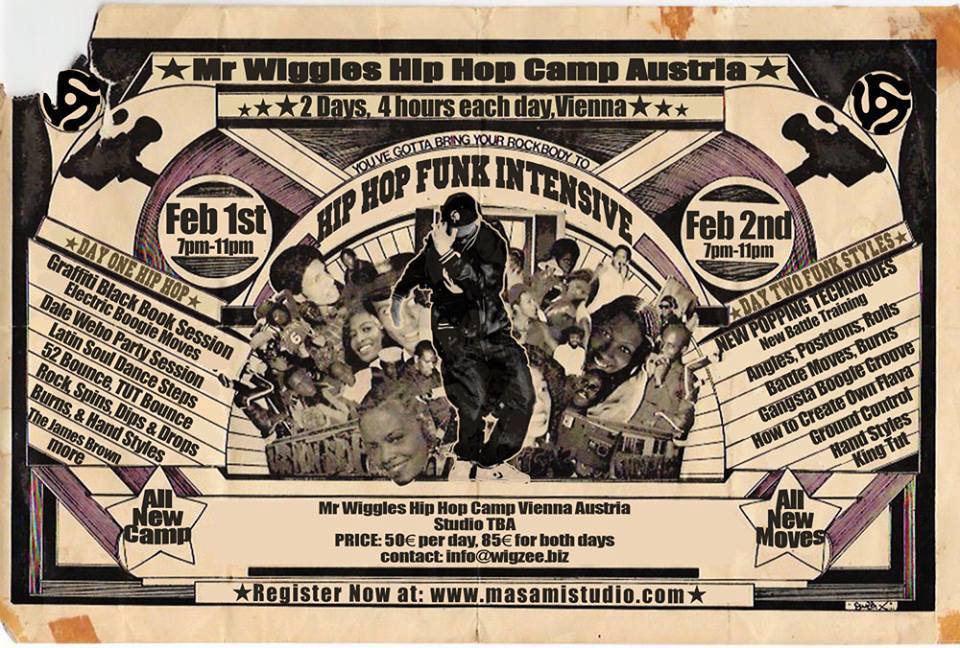 Steffan “Mr. Wiggles” Clemente is one of the most dynamic and influential figures in the Hip Hop culture today. He is a member of the world renown Rock Steady Crew and The Electric Boogaloos. This multi talented virtuoso is blessed with the ability to dance, act, choreograph, teach, produce music (one of his longtime passions) and is a gifted Grafitti artist. According to Ben Higa, writer for Rap Pages magazine, “Mr. Wiggles is Hip-Hop’s jack-of-all-trades – skilled in Popping, Locking, Bboying, Graf-writing and MCing…” He first started out as a kid doing the ‘Robot.’ During the early days, he was influenced by his older sister Wanda and was introduced to the dance after bumping into a neighborhood kid who asked if he was a Bboy. At the time, he didn’t know what a Bboy was and after the young kid hit the floor and executed some freezes, that was it, Wiggles was inspired and started Breakin’.

From theater to film to music videos, Mr. Wiggles has enjoyed a very successful career since those early days and has worked with the likes of Graciele Danielle, SavionGlover, Bill Irwin, Lynne Taylor Corbett and Anne Marie D’Angelo. He was commissioned to produce a musical piece for Kurt Weill’s September Songs working with accomplished musicians Elvis Costello, Iggy Pop and Betty Carter. He has been a featured artist at the world famous Apollo Theater and performed at the Kennedy Center honoring the Nicholas Brothers. Mr. Wiggles was also featured in a Skechers commercial as well as appearing alongside basketball great – Patrick Ewing. Recently, he was among the members of Rock Steady honored at the first „VH-1 Hip-Hop Honors.“ He’s appeared in music videos with such artists as Missy Elliot, Usher, Madonna, Limp Bizkit and more. He was nominated for a Tony Award for Best Choreography for the show Largely New York and was nominated for a Drama Desk award for the Ghettoriginal production of Jam on the Groove. He won a Bessie Award for Best Choreography for the theatrical production of So What Happens Now, a play created by all the original Bboys dedicated to Buck, a Rock Steady Crew member who tragically passed away.

Mr. Wiggles tours extensively as a solo artist and with the Electric Boogaloos and RockSteady Crew. He is a guest faculty member at NYC dance studios and makes countless personal appearances at events across the country and abroad. He was one of the first to teach Hip-Hop in a mainstream studio at New York’s Broadway Dance Center. He distributes his music productions, 100% street edited dance videos and clothing wear through www.mrwiggles.biz. His website enables fans around the world to connect with their hero. Despite his busy schedule, he is committed to participating in out reach programs teaching youth about the positive aspects of the Hip-Hop culture. When asked “What is your greatest gift?” he responds, “Being a father. At the end ofthe day, family comes first.” His respect for self, life, family and all those he touches earns him his well deserved legendary status.